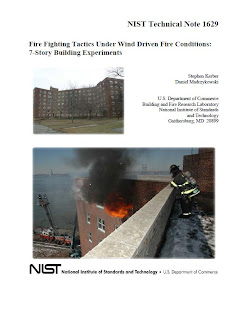 The second part of the NIST Wind Driven Fire Conditions reports has been released. This part details the experiments and results from the Governor’s Island tests. The lengthy report is a must read for those who desire to better understand not just high rise firefighting, but positive pressure ventilation as well. We should also be aware that as recently as Sunday in Loudoun County (VA)[1] and last month in Houston[2], the impact that wind conditions have on private dwellings as well. To encourage you to read this report, excerpts from the second part are below.

“Each of the 14 experiments started with a fire in a furnished room. The air flow for 12 of the 14 experiments was intensified by a natural or mechanical wind. Each of the tools was evaluated individually as well and in conjunction with each other to assess the benefit to fire fighters, as well as occupants in the structure. The data collected used to examine the impact of the PPV fans, WCDs, and the exterior water application tactics were temperature, differential pressure,and gas velocity inside the structure. Each of the experiments was documented with video and thermal imaging cameras. These experiments also captured video of specific fire phenomena that are not typically observable on the fire ground.”

“All of the fires were ignited in furnished rooms of an apartment. Due to excess fuel pyrolysis/generation (lack of ventilation) the room of fire origin could not transition to flashover until windows self-vented and introduced additional fresh air with oxygen to burn. Without a wind imposed on the vented window, the fire did not spread from the room of origin and never left the apartment of origin. Even with no externally applied wind, creating a flow path from the outside, through the fire apartment into the corridor and up the stairs to the open bulkhead on the roof increased the temperatures and velocities in the corridors and in the stairwell resulting in hazardous conditions for fire fighters and untenable conditions for occupants on the fire floor and above in the stairwell.”

“With an imposed wind of 9 m/s to 11 m/s (20 mph to 25 mph) and a flow path through the fire floor and exiting out of the bulkhead door on the roof, temperatures in excess of 400 ºC (752 ºF) and velocities on the order of 10 m/s (22 mph) were measured in the corridor and stairwell above the fire floor. These extreme thermal conditions are not tenable, even for a firefighter in full protective gear.”

“If the fire has vented a window, important information can be gained by observing the behavior of the flame at the window. If the fire apartment has a high pressure relative to the outside due to an imposed wind, the flame will “pulse” out of the window to balance the overpressure. If the flames are being forced out of the window a flow path has been established through the building and the flow direction maybe favorable to interior fire fighting. If the flames are pulsing or being forced into the window, condition may not be favorable to interior firefighting and caution should be used on the approach to the fire floor. Even if flames are being forced out of adjacent windows in the fire apartment with a high amount of energy, there could still be sufficient energy flows on the fire floor to create a hazard for firefighters.”

“Door control is the most basic means to interrupt or control the flow path in the building. The fire floor stair door should be checked for heat or hot gases flowing around the edges. The door should only be opened a few inches at first to look for rapid changes in smoke volume or velocity and/or thermal conditions. If the thermal environment changes quickly, close the door to interrupt the flowpath. In a smoke filled environment, visual changes to conditions may not be apparent with out a thermal imager. A similar approach would be used on the door to the fire apartment.”

“Another factor Norman [16] identifies is that the fire does not have to be 20 stories or more above ground for wind to be a factor. Table 1.1-1 demonstrates that these FDNY wind driven fire incidents have occurred as low as the 3rd story above ground. NFPA data shows that the majority of fires in high rise buildings occur below the 7th floor [2].”

“Every experiment began with all of the doors and windows closed with the exception of the door to the furnished bedrooms and the main entrance door from the public corridor to the fire apartment. After ignition, the fire was allowed to grow until it failed the windows in the room or became ventilation limited. The purpose of the experiments was to get a wind driven fire condition. Therefore when an apartment became ventilation limited because of lack of window failure additional doors were opened remotely such as the stairwell door to provide additional air for the fire to grow. In some cases, windows were manually vented to provide additional air flow.”

“Once wind driven conditions were achieved many different openings were made to simulate the operations of a fire department. These operations included opening the front lobby doors for access, entering the stairwell, opening the door from the stairwell to the fire floor, and opening the bulkhead door at the top of the stairwell. In addition to these operations each of the tools to be tested, PPV fans, Wind Control Devices and Floor Below Nozzles were deployed and evaluated.”

“Wind is a factor. As shown in these experiments, wind can significantly increase the thermal hazards of a fire in a structure. Wind conditions will vary at different elevations above the ground floor, on different sides of a building, due to the effects of surrounding structures or topography, or just changes in the wind itself. Therefore wind needs to be considered as part of the intial “size-up” of the fire conditions and continue to be monitored and reported on throughout the fire incident.”

“Smoke is Fuel. A ventilation limited (fuel rich) condition developed prior to the failure of the windows. Oxyge
n depleted combustion products, containing carbon dioxide, carbon monoxide and unburned hydrocarbons, filled the rooms of the structure. Once the window failed, the fresh air provided the oxygen needed to sustain the transition through flashover, which caused a significant increase in temperature.”

“Venting does not always equal cooling. In these experiments, the cool air forced into the broken upwind window resulted in an initial period of cooling in the room of origin, typically followed by a transition to flashover, if a flow path was available.”

“Fire induced flows. Velocities within the structure exceeded 5 m/s (11 mph), just due to the fire growth and the flow path that was set-up between the window opening and the open bulkhead door on the roof.”