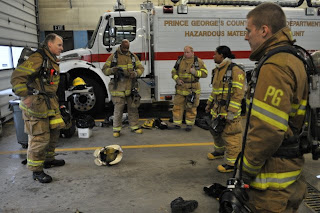 In review of the fireground “mayday” in Prince George’s County (MD) involving Firefighter/Paramedic Daniel McGown[1], Acting Fire Chief Eugene Jones has issued a Stand Down for Safety[2] this week. The focus of the training is to review standard fireground operations; mayday procedures; SCBA use and emergency procedures; and crew integrity. Career and volunteer members from all companies will be participating. Firefighter/Paramedic McGown was found unconscious by members of another company, while operating at a house fire. His PASS device activation (due to his unresponsiveness) alerted a member from a special service to begin searching for the PASS source. When Firefighter/Paramedic McGown was found, a mayday was transmitted and he was quickly removed from the structure and transferred over to EMS personnel[3]. Thankfully, on 14 April, he recovered well enough to be discharged from Washington Hospital Center and continue his recovery at home.

I posted a thread at Firehouse.com titled “Mayday, LUNAR reminder”[4] to prompt some serious thought and discussion in an area where most users are mainly concerned with what brand of glove to buy and why the N5A is a better helmet than the Phenix leather. I prompted readers with the following questions:

Close calls prompt us to think of what we would do if the situation presented happened to us personally. It also prompts us to see where we may be weak and need some additional practice or training. The story above should cause us to consider:

You come in as part of a later arriving company and find a firefighter down; what do you do – or better, what are you expected to do?

What does LUNAR mean for you and your department? (I’ve learned that not everyone has the same words in the mnemonic)

Chief Officers, you have a mayday transmitted early into the fire attack, before all of the first alarm units/companies are on the scene; what do you do – or better, what are you expected to do.

If you follow the thread, you will see, amid the usual rants, a user seriously questions what I mean by “LUNAR”. From there it continued where users constructively discussed the details of the mnemonic. One interesting point that it appears the majority agreed on was having no need to transmit the member’s name (N) in the mayday. The biggest reason was that the actual name did not matter (not enough in the beginning of a search, for instance) as well as the fact that fireground transmissions are easily listened to via traditional and online scanners. I believe that is a good point, yet we still need to know the name of the downed or missing member. In departments where father and son, or brothers, may be operating on the fireground, it would be a good practice to quickly determine if we are looking for Mark or Mike Murphy.

Another interesting item, in a relevant thread, showed that not everyone in the fire service is aware of repositioning the SCBA waist strap[5]. The procedure I and others elsewhere, learned is that when we have to remove an unresponsive firefighter, we take the waist strap, lengthen it out and then run it between the legs and buckle it. This keeps us from pulling the SCBA, and some of his gear, off the firefighter as we drag, carry and lift him. This thread was not that constructive, as it appeared to begin as a bash. But just like the mayday thread, I learned that what I used to think was as universally known was an unknown in some parts of the country.

It is important that we (immediate department and mutual aid departments) are learning the same things as long as we find ourselves on the same fireground. I suppose it may not make a huge difference with what you or I do with a firefighter’s waist strap; however, if I use “mayday” and LUNAR and you use “priority traffic” and LIP then important information is probably going to be lost. When reviewing mayday communications within another department, ask the following:

When was the last time your department and the mutual aid department trained together on mayday communications?
Do we both use the same terminology to alert the incident commander to a firefighter in distress or missing?
Do we have the same procedure for fireground and rapid intervention communications in the event of a mayday?
Are the roles and responsibilities clearly spelled out for the rapid intervention crew, regardless of what department they are from?
What areas will be problem points for us (Do you have to carry a separate radio when responding mutual aid? What if that radio goes bad?)

If you call a LIP and the mutual aid department assigned as the RIC is still wanting the firefighter’s Unit, Nature, Assignment and whether or not he is Radio-equipped (or is it Remaining Air?), will communications be fumbled?