The next time you run that report of smoke coming from the local Quick Mart or 7-11 will your attitude towards search be different?
Do you consider such occupanicies to be ‘unoccupied’ depending on the business hours?
What type of informal preplanning can reveal such conditions (i.e. medic locals, shopping for the meal) 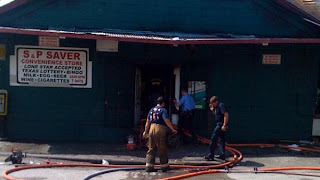 3 rescued from fire at Houston convenience store
By Moises Mendoza
Copyright 2009 Houston Chronicle
April 19, 2009, 10:24PM
Luther Williams was sitting on his porch drinking coffee at 10 a.m. Sunday morning when he saw smoke rising from a building down the street. “The grocery store is smoking!” Williams told his nephew Wayne Norman. By the time Norman called 911 and started banging on the door of the S&P Convenience Store, it was in flames. People were inside the store, he told arriving firefighters. Folks sleep in the back of it. Firefighters faced a big problem — there were three sets of bars on the front door and parts of the building were in danger of collapsing. After using special tools to slice through the bars, firefighters entered the building and pulled out the three occupants. None of them were breathing so emergency personnel performed CPR and transported them to area hospitals, where they were listed in critical condition, said fire department assistant chief Omero Longoria. “With all the challenges we faced getting these guys out, this was pretty darn good,” Longoria said. The store, which locals called a neighborhood hangout, was gutted. There was a hole in the roof where firefighters had aired out smoke. The inside looked like a burned out hulk, with packages spread everywhere. Neighbors stood nearby, looking at the damage. Officials said they weren’t sure what caused the blaze.
moises.mendoza@chron.com
Photograph courtesy KRTK ABC-13