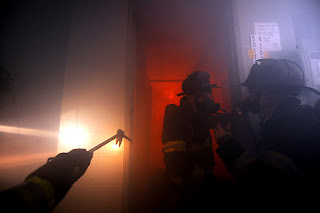 Another possible tool for us to add to the proverbial toolbox is a new gadget aimed at tracking people. Intelligence Safety Solutions released a prototype of SafetySet, an electronic device that is reported to be able to provide a definitive answer for determining if occupants are still in a building. According to researchers from the University of Pittsburgh, SafetySet “could enable first responders to pinpoint within a few feet the locations of people inside burning buildings or other structures where there is an emergency.” The device can also help us in times of disorientation according to Peter Hawrylak, of Pitt’s RFID Center of Excellence. “For example, a firefighter’s RFID tag would send electronic signals to a commander’s laptop computer outside a burning building. The commander could monitor the firefighter’s location and provide directions if needed.” RFIDs, or Radio Frequency Identification tags have been in use for quite awhile, mostly used to track cattle, luggage, boxcars, items shipped long distances. The retail market is developing RFIDs to speed our time purchasing items by nearly eliminating the checkout line and the self-checkout line. While not explained in detail in the news article, we are being led to believe that RFIDs can allow the first arriving companies to know the exact location of every single occupant in a structure with RFID tracking. Also, incident commanders will be able to know the exact location of every single firefighter on the fireground, should they be tagged with an RFID. If one member should become disoriented, then the incident commander can simply “provide directions” (we must theorize that the incident commander has pre-plans for this to work).

New items for the fire service are always viewed with skepticism, but two statements in this article should cause every one of us to question the intentions of Intelligence Safety Solutions and its partner, The Parallel Group.

“”We lose about 200 first responders a year in these situations,” said Grant, CEO of The Parallel Group and marketing chief at Intelligence Safety Solutions LLC in the South Side. “They’ll mount a search-and-rescue operation without knowing who’s in there.”” – Dan Grant (bold mine)

The way that Mike Cronin of the Pittsburgh Tribune Review writes the article, it is a guess that Mr. Grant means firefighters, and that he means lost while searching for occupants. 200? Somehow the USFA has lost count of this additional 100 first responders who may have been “lost” each year.

“”If we get this right and make it cost effective and easy to use, we hope that every first responder worldwide views this as the industry standard.”” – Dan Grant (bold mine)

What is our “industry standard” and what are the references used to qualify this device as a standard for firefighting operations, particularly search and rescue? We have a difficult time defining the standards among ourselves for the most basic operations. Just look at any fire service website forum and you will see debates about whether or not to lay a supply line when approaching the building, searching vacant buildings, and with regard to the Houston apparatus accident, what levels of response to use. When new equipment breaks the prototype barrier and begins to be promoted our way, especially when funded as a “standard”, we need to determine if the inventors are properly informed before the salesman gets his foot in the door.

In the meantime, another new tool was introduced to help firefighters in one department perform according to “industry standards”
[youtube=http://www.youtube.com/watch?v=_4xNve-bFtQ&hl=en&fs=1]
“The truck confirmed the reported location of the fire, the engine stretched from the floor below, to extinguish the fire – the engine stretched off the standpipe to extinguish the fire.” Battalion Chief Jim McDermott