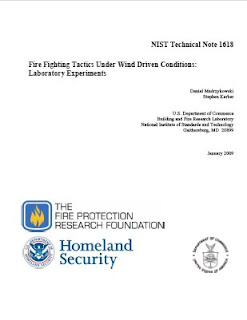 The National Institute of Standards and Technology has released the first report from the wind driven firefighting research. “Fire Fighting Tactics Under Wind Driven Conditions: Laboratory Experiments“. Eight experiments focused on the effects of wind on fire spread and were intended to expose the public hallway to wind driven, post-flashover fire conditions. The use of wind control devices and exterior water application (high-rise nozzle) showed significant reduction of temperature in the public hall. The second report on this subject will detail the research and findings from the tests done on Governor’s Island.

For the fire service nationwide, this research carries not only significant information for approaching high-rise fires, but for approaching a change of tactics as well. We first take notice of this change a year ago when the testing on Governor’s Island was being done. Immediately the research team (firefighters, fire officers and scientists) concluded that strategies and tactics based on fifty years of firefighting may have to be reviewed and possibly changed. Likewise we learned that wind driven fires apply also to private dwellings. The construction type, fire location and extension, and weather conditions all play a part that need to be reconsidered. That ‘blow torch’ in the hall can be found on the second floor of a newly constructed McMansion just as well as on the 21st floor of an OMD. Another significant fact buried in the research data is the delivery of the data itself. Culture change in the fire service is at times impeded my misunderstood tradition. Culture also is prone to prejudices and biases. Within this research, members of the FDNY and other departments have put aside stereotypes (book-smart firefighting) in an effort to find an more effective fire attack that is less punishing. Go back to two statements made from the first wind driven fire findings:

” – about our attack strategies; send two lines down the public corridor and through the strategy and technology and NIST was able to provide the data, that really we weren’t effective at all and the only thing we were accomplishing was injuring our own members.”[2]

If one of the largest and busiest departments in the nation can openly introduce science into its review of strategy and tactics, then we all should. The statement below sent to me from a fire officer from the Wisconsin area reinforces the need for us to drop the biases and prejudices in order to embrace the science and technology,

“I was there helping at the Chicago tests and I was amazed at NIST’s methodology; and the cooperation between skeptical Firefighters and their academic counterparts. Everyone was putting their opinions, biases, and ideologies aside during the tests and you get documents like this when that happens. I am glad that NIST is beginning to conduct seminal work that is actually going to give firefighters new methods and benchmarks (NIST’s new staffing research), rather than give manufacturers new products to push. Bunker gear and apparatus are better than ever before, sans their seat belts, so it is refreshing that firefighter methods are being born out of objective research to compliment this protection. Let’s ensure that this type of research continues.” 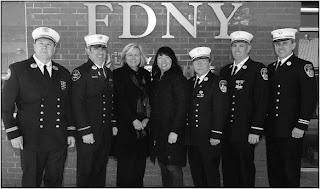 The above-listed FDNY members were the core
group of people who worked on the Fireproof
Multiple Dwelling Wind-Driven Fire Project. The City of New York has experienced too many injuries and fatalities to civilians and members of the Fire Department as a result of these kinds of fires. The FDNY needed a new, alternate method of extinguishing fires affected by high winds. This smoke-control research was field-tested in Toledo, Ohio, Chicago and New York City (on Governors Island). As a result of this testing, the Department started a pilot, employing positive-pressure fans, windcontrol devices and a high-rise nozzle for fire extinguishment. Scientific testing and measurement, assisted by the National Institute of Standards and Technology (NIST) and PolyTech University, proved the effectiveness of these tools and new approaches to firefighting. Additionally, the team developed a training DVD that covered safe operations for Fighting Wind-Driven Fires in High-Rise Multiple Dwellings and the use of this equipment. This program was funded by a federal grant through the Department of Homeland Security (DHS). DHS has used this endeavor as a model on how to effectively use federal grants to solve problems. This project was highlighted at major fire conferences in Denver and Washington, DC. DHS has just awarded the Department $1.4 million to continue with the expansion of the pilot program and training. Because of the team’s constant oversight and dedication, this undertaking was a tremendous success. This project will positively affect how all fire departments operate at wind-driven fires in fireproof multiple dwelling buildings. For their unwavering commitment to research that will save the lives of Firefighters and members of the public, FDNY presents the above-listed members with the James J. Johnston Memorial Medal.[3]