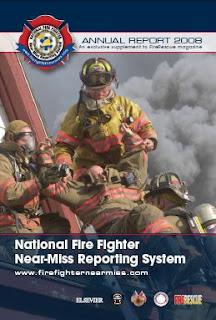 The 2008 Annual Report from the National Fire Fighter Near-Miss Reporting System has been released. 590 reports were posted, an increase from the 477 in 2007. A total of 2,149 reports have been posted to the site since 2005.

Some interesting data from the 2008 Annual Report are:

FEMA Region III (District of Columbia, Maryland, Delaware, Pennsylvania, Virginia, and West Virginia) had the most reporters by Region, 130

67% of those reporting the incident were involved in the event

Could this (the near-miss) happen again?
Yes 66%

What is even better for us to digest and learn from is the Callback Data. Approximately 90% of the reports submitted included contact information, allowing for additional research by the Near-Miss staff. “Unsafe Acts” and “Preconditions to Unsafe Acts” account for 79% of the Root Cause of Event.