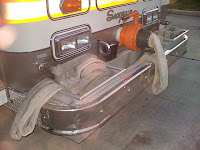 A tale of two engine bosses

On 3 December 2008 a box alarm was transmitted for fire coming from the hot tub at 4806 Jamestown Road in Bethesda, Maryland
[1]. Prior to units arriving, dispatchers transmitted the Rapid Intervention Dispatch and Task Force alarms. The reason for the quick additional alarms was most likely that the calling party, a father of two-month old triplets, reported that his children were trapped on the second floor. Engine 711 (Glen Echo) arrived to find a working fire in the rear involving the deck and dwelling, extending into the second floor. Rescue Squad 741 (Bethesda-Chevy Chase) was the second arriving company and began the primary search, moving up into the second floor to locate and remove the infants. In the end, the triplets were successfully removed by members and transported to area hospitals. Two firefighters from the squad received minor burns in the process.

If you look at the news reports alone one noteworthy item is missing; Engine 711 arrived with only three personnel. Not a result of economic budget cuts, but the everyday career staffing in Montgomery County is three. This does not include volunteer staffing that may be available to ride as well. While this fire could be a useful reference to increase staffing, the biggest debate within the local fire service here is whether or not the officer of Engine 711 deviated from department SOPs by entering the dwelling without a hoseline. Some of the news stories report that Captain Oglesby made his way in, found the stairs and began a search, venting a window as he moved. After venting the window, the captain was forced out of the room due to the heat. He left to retrieve a hoseline and was passed on the stairs by Lieutenant Warfield Jr. and Firefighter Klavon from the squad. They found the crib and removed two of the triplets and shouted about the remaining one to Oglesby and they passed each other once again.

An engine company staffed with three is no better than a truck company staffed likewise. While a three men truck is limited in the multiple duties they can do those first minutes after arriving, a three men engine can still stretch a line. A three men engine can also affect obvious rescues, or can they? The challenge is should an officer or other member deviate from a SOP to perform a rescue when it may lead to a delay in needed immediate actions? Should the engine officer be pulling the last shoulder load or clearing the bed instead of starting a search?

The problem with this is that the fire service informally critiques incidents to death and never seems to know the difference between being there and hearing about it. Try as we would like, unless we were there we will not understand the decisions made by those who were there. All we do is contribute to the what-ifs. What if the Captain had been able to scoop up all three and come out with them, would there still be speculation and innuendo about not taking a line in first? What if the engine had six on board and the line made it up at the same time the squad did? Should the window have been vented before a line was in position? Did the squad bring a can with them? What if the squad arrived first and those members were driven out – would we still want a line in place first or do we expect the squad to be in ahead of the line? Too many questions take us away from the specifics of what actually happened. It is better to look at how we make the decision instead of what the decision is.

In September 2008 the PERI Symposium “Reducing Firefighter Deaths and Injuries”[2] brought together a number of individuals to discuss this national fire service challenge. Among the notable fire service figures was Chief William Pessemier of Oklahoma State[3] University and Brian Crawford of Shreveport (LA) Fire Department[4]. These two addressed perceptions and individual behavior that affect making personal decisions on the fireground. Pessemier wrote of biases that influence our behavior as well as cause us to consider the fast, risky choice instead of the slow, safer one. Crawford noted the cultural belief that firefighters have a duty to give their life for others. The points relevant to 4806 Jamestown Road are would the actions of allegedly not having followed some type of SOP be rewarded if it was the engine captain who had brought out the triplets on the first attempt? Do the outcomes – good and bad – reward or punish our sociological drives, influencing future choices?

How we perceive risk influences our motivation towards risk. If we believe that through our own actions cutting the corners on some part of our safety will help us to quickly complete an assignment and benefit a greater good, then we will naturally cut those corners. In June of 2007, another engine company officer made a similar choice. Engine Company 9, of the Bladensburg Volunteer Fire Department (MD) arrived on the scene of a fire in an apartment building in their first-due area. As they arrived, dispatchers added that a child was reported to be trapped in the fire apartment. Captain Chris Moe and Firefighter Ryan Raneiri left the engine and made their way into the building. Out front was the child’s mother, clad only in a wet bath towel and with soot stained face, crying that her baby was inside. As Moe and Raneiri moved inside, the rest of the engine company was quickly behind them with the initial handline. Finding the baby in a crib in the fire room, the two passed the child to a firefighter from the second-due truck coming in over an aerial ladder[5].

When looking at ensuring our safety, we also need to look at the costs. These cost are time, effort and comfort. At 0400 in the morning and neighbors screaming outside, is it worth our personal cost in safety to not try and make a rescue? When dad is outside, sooty and injured telling you where the kids are, do you not weigh your personal comfort against that of a two-month old on the floor above? When mom is in the parking lot, only in a bath towel, crying about her baby, would she understand your SOP flip chart?

Should they have stayed with the line and worked on the stretch? In the Bladensburg fire, the apartment layout had the interior hall in a serpentine like flow. Maybe it would have helped, but in interviewing the two they stressed two key points: the company knew the layout of these apartment buildings (drills, past calls, engine company training); and the engine officer had complete trust and reliance that the other members would be able to quickly stretch the initial handline while he and Raneiri were searching. “From that point, he and Moe then moved into the rear bedroom. “I could hear the line coming up behind us and Moe taking out another window, and then I could feel the railings.”” [6] A 200-foot crosslay to a second floor apartment can be done correctly between the lineman and another member; especially if the engine staffing is six. But what about the same type of stretch in a private dwelling and the engine has three?
Does the officer have to be pulling that last fold or clearing the bed, especially if a parent is standing outside screaming “my babies, my babies, save my babies!”? In both fires, the reward, getting the kids out, reinforces the behavior of the individual. After all, that is our job.

To stretch or not to stretch, what do we do? Of course, those of us running with five or six men engine companies can surely stretch the initial handline and perform a search, but what about the three men engine company. I’ve worked with three men alone who could confidently and properly stretch the 300’ line off our engine. I’ve also worked with individuals who needed step by step instructions on how to pull the bumper line. These matters are worked out in training and more training. It is the process of determining what to do that gets muddied. Maybe this is related to the conditioning of going to fewer fires. The fire service unknowingly complicates an individual’s sense of obligation, when out of one mouth we say “grab the kids” and the other “put the fire out first, and all other problems go away.” Complete trust and reliance that the other members would be able to quickly stretch the initial handline. That alone, for the engine boss, will play a huge part when faced with a parent outside telling him “save my babies!” when it’s just him, the lineman and the driver.

Note: I imagine it could be more complicated; you could be detailed to the ambulance,
Medical Local Results In Rescue by Franklin Square Firefighters
December 7, 2008 by DCFD.COM Staff
On Sunday December 7 at 0601 hours Ambulance 16 was dispatched for a minor burn at 1510 12th st. NW. When the ambulance crew arrived on scene, they found people outside the apartment building in a frantic state. The civilians advised the ambulance crew that not only was their friend burned but their apartment was also on fire with the burn victim still inside. The firefighters on the ambulance proceeded to the fire apartment where they found one victim in the smoke filled living room. He was quickly removed from the fire apartment and the crew transmitted a box alarm request to communications. As one of the members tended to the victims burns, the other firefighter returned to the apartment building to assist the further removal of building tenants. After the arrival of the box assignment, the burn patient was transported to the hospital by Ambulance 16. A job well done by Firefighters Jason Lerch (TW.3 – 3) and Benjamin Evers (E.16 – 3)

Get Out As Soon As You Can