This series will look in detail at three principles of a disciplined and effective engine company: Prepared to Work; Knowing the Response Area; and Basics of Handline Stretches. Each will look at points to address before the alarm. 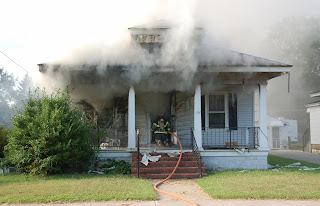 Prepared to Work
The modern firefighter comes out of his or her introductory training with basic knowledge that needs to be honed on company specifics and department tactics. For the engine company this first principle, being prepared to work, is reinforced by the riding assignments. The engine company, regardless of department type (career, combination, volunteer) should be operating with some form of riding assignment to ensure the primary mission, extinguishing the fire, is accomplished. All too often, today’s three-man engine company is left to try and do the initial fireground tasks that usually require six or more personnel. Whatever the reasons for the staffing shortage, some departments rely heavliy on the first arriving engine to not only secure the primary water supply and run a line, but to also search the entire structure, ladder the structure and ventilate as well, all before the arrival of the second company, whose staffing may be uncertain. For some of us, these maladjusted tactics are not our fault; we really don’t know what we get with ‘home response’ so the first due engine will have to do all it can until mutual aid arrives. For others, this may mean that we rely on the wagon driver to be an impromtu OVM once he gets us water, until the first due truck arrives. What happens as a result of trying to do everything is that our (engine company) most important tasks become “good enough for government work”. Because we don’t know if the truck will get out, the engine officer now has to be the irons man, and the guys on the line each loose one hand due to having to carry a tool. Instead of chasing kinks, we have to throw ladders and get the gas operated door chock (PPV fan) out and ready. Because we don’t know who can leave work in the daytime when the pager goes off, we go to a fire fully resigned to the fact that we have no clue what we will do until we get there and see what’s burning.
Riding assignments are not so that we look like so and so, nor are they only to be used when every seat is full. For the engine company, riding assignments are the insurance that the basics of our job are done, resulting in the fire going out. If you’ve forgotten, then these basics are:

Without riding assignments, the engine company is essentially making it up as they go, at every single fire. With them, the basics are regulary followed. To have this insurance, your comapny needs to honestly look at what it can realistically accomplish given its average staffing; not the meeting night staffing, but the every day average. Once this is accepted, then we can fill in the details. While at Hyattsville, when we rewrote our engine company riding assignments, we first looked at our average duty night staffing. On average, most nights ran with a crew of four on the engine. If we had two crews, then the special service [2] got the extra persons, and then the engine would have what was left. This also coincides with the department’s general order regarding minimum staffing on engines (3) and special services (4). If you regulary have less than three on an engine company then you should be realistically expecting to accomplish only securing the water supply and beginng to advance the line. Anything else will require the staffing of an additional company.

What we also reviewed was our first due area. This is a mix of private dwellings, garden style apartments, stand alone apartments and high rise commercial and residential structures. Along with this was the response of neighboring departments. On box alarms, individual stations are alerted to provide the standard four engine, two truck and one rescue squad company. This prompted a change to the previous engine company riding assignments. In the past, it was the responsibility of the firefighter in the other ‘bucket’ to be the forcible entry man (F/E). With the response of a truck, be it ours if we ran a second crew, or someone else’s, we gave up this assignment and made the F/E the Backup position. The reason is that if our truck was regulary responding with the engine, then there is no need to duplicate the F/E position. The Backup firefighter can now be hands free to assist with the initial handline stretch or the standpipe connections. To compensate for times when we were running with only one crew, then the F/E responsibilities would fall on the engine company officer, for first due fires. Below are the engine company riding assignments we developed, critiqued, drilled on and eventually put into daily operation:

Hall
Area: Interior
Primary Duties
Obvious Rescues
Assist in Advancing Hoseline
Chase Kinks from Doorway to Backup
Responsible for Standpipe Riser Connection
Assist with Confinement and Extinguishment of Fire
Assist with Primary Search in the Fire Area
Assist with Interior Ventilation and Checking for Extension
Any Other Duties Assigned by Officer
(Layout if 5 Man Crew)
Tools
SCBA
Handlight
Water Can*
Rope Bag*
(*-If operating on a Hi-Rise Incident)

Layout
Area: Exterior/Interior
Primary Duties
Layout Supply Line
Assist Driver with Connections
Obvious Rescues
Clear Hosebed
Chase Kinks from Wagon to Entrance
Assist with Confinement and Extinguishment of Fire
Any Other Duties Assigned by Officer
Probationary Members
Same Duties as Above
Assist with advancement of backup line
Ladder fire building with ladders from the wagon
Any other duties as directed
Tools
SCBA
Handlight

Here we created riding assignments that worked with our regular, average staffing and were flexible enough to adapt to staffing changes as well as avoiding having engine company members performing duties carried out be special services responding alongside and working with us. These assignments also brought out a clearer view of the responsibilities of the engine company and the individual members. As you can see, each position is responsible for the whole of the initial handline stretch. It is true that there have been, and may be, times where the written duties had to be put aside for some greater good, but the key in creating the riding assignments is to not write them for every possible hypothetical situation, but to write them for the primary functions of the company therein. By having a universal game plan, understood by all players, there is less chance of errors in the fire attack. 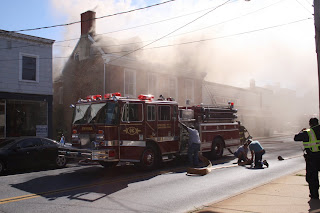 A weekday fire, in the afternoon. An obvious working fire, with no obvious rescues. With a crew of four, what are each individual’s priorities and what do you realistically expect to accomplish within the first three minutes? 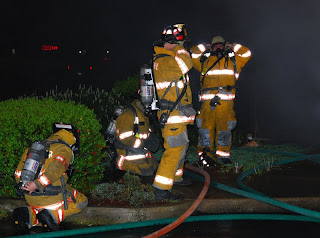 Suppose a four person engine company preparing to advance a line into this commercial structure. As your department operates, what are their duties? Is there a common goal or are they basically freelancing in a governed state? What happens if one or more of these members fails to carry out his assignments?

Get Out As Soon As You Can