Two interesting statements were made regarding firefighting strategy and tactics in May of this year. The first came during FDIC in an interview by Fire Engineering’s Bobby Halton. Chief Halton spoke with the NIST staff about the wind-driven fire experiments conducted in February of this year [1]. NIST along with the FDNY [2] and PolyTechnic University [3] conducted experiments on the techniques used to control the wind in high-rise fires. The process, funded by a FEMA grant, collected scientific data about thermal heat transfer with the use of a large fan (simulating high-rise wind conditions) and positive pressure ventilation fans, aligned with the “routine” fire attack strategy. Throughout this year, the information gathered is being entered into computer simulations by both PolyTech and NIST to provide theories as to why some equipment and strategies are, or are not, effective [4]. Dan Madrzykowski’s statement “maybe sometimes the tactic of sending the guy to the roof to open the bulkhead first before they go open the door to the fire room may not be the right thing” is what should cause us to follow this study in earnest, or at least be mindful of the resources available for reviewing our own strategy and tactics[5]. 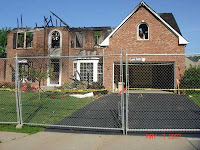 The second interesting statement is found in the NIOSH Firefighter Fatality Report of Prince William County, Virginia [6]. In April 2007 Technician I Kyle Wilson was killed after becoming trapped in a second floor bedroom during a wind-driven fire. The converse is that this was not a high-rise fire, as we would normally think of when discussing wind-driven fires. Four times in the NIOH report the prevailing wind was referred to as having been a highly probable factor in the sudden change of fire conditions. The first recommendation in the report urges fire department SOPs “address the hazards of high wind and gusts[7].” According to the investigative report from Prince William County we can learn that there was a “high wind advisory in effect [8]”; and that the high wind impact was among other attributes, “blow torch effect”[9]. We usually are accustomed to the blow torch phrase when reading of high-rise fires, but this comes out of a two-story private dwelling[10]. Of the recommendations from this report and others where weather is a contributing or significant factor[11], we may see the inclusion of weather facts as part of the information in the initial dispatch. We know it has been in use for years in the area of hazardous materials response and if we are to take anything, immediately from past high-rise fires and past wind-driven fires, we should begin to consider it within our own departments. In some instances, what will come out of recognizing the effects of wind on private dwellings, departments may reconsider where the initial line enters and where (or when) the primary search will start. The wind is not the only contributor to this fatal fire, but as begun in this piece, the wind is being noticed on a scientific and strategic standpoint by more than one particular audience. To receive a copy of “Positive Pressure Ventilation Research: Videos and Reports” from NIST, Fire.Gov, email skerber@nist.gov with your name and mailing address. Comments about this piece are welcomed. When doing so, sign your name.
Photographs courtesy FDNY, NIOSH
References
1. Wind Driven Fires, Governors Island, NY. Fire.Gov
2. FDNY Studies the Science of Wind-Driven High-Rise Fires, FDNY
3. Poly teams up with FDNY to fight fire with engineering, PolyTechnic University
4. FDIC interview. A practice turned myth, according to FDNY Battalion Chief George Healy, is “about our attack strategies; send two lines down the public corridor and through the strategy and technology and NIST was able to provide the data, that really we weren’t effective at all and the only thing we were accomplishing was injuring our own members.”
5. Ibid. FDIC interview
6. Career Fire Fighter Dies in Wind Driven Residential Structure Fire, Virginia. NIOSH May 2008
7. Ibid. See also “Brunacini, A V [1985]. Fire Command. Quincy, MA: National Fire Protection Association.” and “Dunn V (1992). Safety and survival on the fireground. Saddlebrook, NJ: Fire Engineering Books and Videos.”
8. 15474 Marsh Overlook Structure Fire Investigative Report, April 2007, page 27
9. Ibid
10. Career Fire Fighter Dies in Wind Driven Residential Structure Fire, Virginia. NIOSH May 2008. “LT#1 and his crew along with the R10 crew were still at the front door which had slammed closed.”
11. Career Lieutenant and Career Fire Fighter Die and Four Career Fire Fighters are Seriously Injured during a Three Alarm Apartment Fire, New York. NIOSH, December 2006
“Due to the adverse weather conditions [snow], the department had increased the staffing to five firefighters and an Officer in all Engines normally staffed by four firefighters and an Officer, and to six firefighters and an Officer in all five Rescue companie
s which are normally staffed by five firefighters and an Officer. The following units responding to this incident on the first alarm had the additional fifth firefighter: Engines 42, 46, and 75, and Rescue 3.”
“The weather at the time of the incident included light snow with a temperature of 17°F and an average wind speed of 12 mph, with gusts up to 45 mph from the northwest. A blizzard leaving a snow depth of 13 inches occurred within hours preceding the incident. Weather conditions played a role in this incident with frozen hydrants, wind affecting the fire conditions, and a slightly delayed response time due to road conditions. The entire city block around the structure had not been plowed prior to the incident.” brackets and emphasis mine

The Future of EMS Education