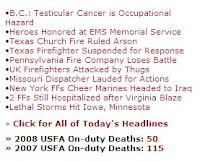 For the past three months I’ve found myself scrolling down the Firehouse.com homepage repeatedly looking at the “tally”, the USFA’s official LODD count, and realizing that we (the fire service) are projected to average 10 deaths a month. This was back when the number was at 47 and as you can see by the snapshot from today, we are at 50. Another item I was repeatedly looking at was an article written by Charles Bailey, titled “One Really Bad Week”. Bailey makes a commentary based on the number of LODDs during the first week of March 2008 and affirms a thought that I have been trying to develop for a number of years. In his writing he states:

“Science has made it clear that lightweight construction will fall quickly and we are still to be found underneath it. Science says that without air we die and we are still stretching our air supplies to the limit. Science says that a seat belt can save a life but still we find people falling out of fire trucks. I no longer believe that science holds the answer to our problems.”

There is a disconnect, as Bailey also mentions, that I believe is a causal factor for deaths and close calls and should be investigated. Nothing can be lost and much can be gained by looking deeper at why we do some of the things we do. My writing for Firehouse.com began focusing mostly on engine company operations and firefighter safety. Since I am no longer an active firefighter, I have looked at the direction of my writing and its relevance to the face of today’s fire service, and have to say that to be up to date with “the job” I’d have to still be in “the job”. I’ll still be writing about engine work, but there will be a noticeable shift in the direction I try to lead the reader. The focus now will be more towards finding that disconnect, and what can be learned from it, while still stressing the basics. Writing here will piggyback on those articles and look deeper into what we do and incorporate additional facts, references, theories and commentary.

Readers are encouraged to contribute to the information presented.